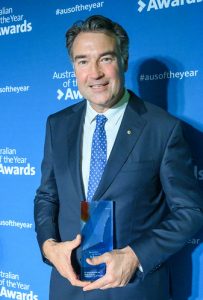 In a win for the eye health sector, South Australian ophthalmologist Dr James Muecke, AM, has been named Australian of the Year for 2020 and is putting diabetes on his hit list.

Dr Muecke received the accolade from Prime Minister Scott Morrison at a Canberra ceremony on Saturday night for the 60th anniversary of the awards, 20 years after eye health innovator, ophthalmologist Professor Fred Hollows received the 1990 award.

Dr Muecke co-founded Sight For All, a social impact organisation which creates low-cost programs to fight blindness through research, education and infrastructure, and raises funds to deliver eye health care projects free overseas to partner countries and communities and train colleagues there in new sight-saving skills.

‘It is an enormous honour for 2020, such an auspicious year for eye-sight,’ Dr Muecke told the ceremony. ‘Sight for All is a far-reaching team effort.’

Its team of visionaries include more than 120 ophthalmologists, optometrists, orthoptists and ophthalmic nurses from across Australia and New Zealand who volunteer more than 10,000 hours a year. 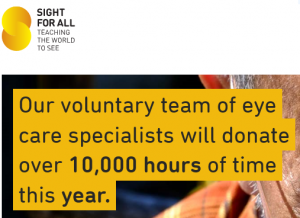 Dr Muecke donates 40 hours of personal time weekly to Sight For All, and is involved in projects in Ethiopia, nine Asian countries, and mainstream and Aboriginal communities in Australia. His leadership, determination and passion has improved eye health and helped alleviate poverty and disadvantage.

‘I’m passionate about fighting blindness and we do have a fight right here in Australia,” he told the awards ceremony. ‘In 2020 I’m taking the fight to diabetes.

‘As an eye surgeon we often see people at the end stage of their diabetes when it is too late to save their sight.

‘My mission this year is to go back to the root cause of diabetes and prevent this looming health catastrophe and challenge our perception of sugar and our relationship with sugar. Sugar is as toxic and addictive as nicotine.

‘To reduce blindness, we should also encourage those with diabetes to have more regular eye examinations.’ 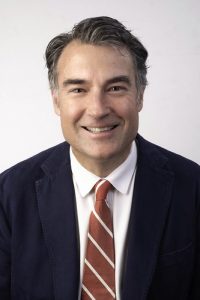 SA grandfather, Neil Hansell, said he had a typical ‘she’ll be right’ attitude when diagnosed with type 2 diabetes aged 30 and was too busy working and being a father to worry about it.

‘That was until I went to bed one night and woke up blind the next day,’ Mr Hansell said in a video beamed to the awards ceremony. ‘It didn’t have to be this way. Let me be an example of the great work of Dr Muecke because seven years later I now have 30 per cent of my eye-sight back thanks to him.

‘He is working tirelessly to help us understand the link between diabetes and blindness.’

Dr Muecke started his medical career in Kenya and in 2000, co-founded Vision Myanmar at the South Australian Institute of Ophthalmology. The $1 million program has developed and operated eye health and blindness initiatives in Myanmar. Inspired by its success, he co-founded Sight For All.

Badges of the Order of Australia for (L-R) Companion (AC), Officer (AO), Member (AM) and Medal (OAM). Reproduced with permission from the Office of the Official Secretary to the Governor-General

Others to receive awards in the Australia Day 2020 Honours List for service to eye health include:

Officer (AO) in the General Division of the Order of Australia:

Medal (OAM) of the Order of Australia in the General Division:

Member (AM) in the General Division of the Order of Australia: