Flinders University ophthalmology experts have joined US colleagues to discover a new genetic cause of primary congenital glaucoma.

Flinders research leader, ophthalmologist Professor Jamie Craig, said the study used samples from around the world to link the disease to mutations in the TEK gene which can lead to a poorly formed or absent cell-membrane receptor protein for proper development of a drainage channel, leading to elevated eye pressure over time.

Dr Chan is from the Vision Eye Institute in Chatswood and Southern Ophthalmology, Kogarah.

Australian Prescriber, a free, independent peer-reviewed journal providing commentary and the latest news on drugs and therapeutics for health professionals, is now published only digitally.

The June issue can be accessed on Australian Prescriber‘s new website.

The journal was first published in 1975. Domestic distribution remained stable around 53,000 printed copies, which its editorial executive committee believed was the largest circulation of any medical journal in Australia.

Intensive glycaemic control halves the risk of diabetic retinopathy in people with type 2 diabetes, a study in Diabetes Care shows.

The ACCORDIAN study followed 1,310 people from the earlier ACCORD study and found the risk of diabetic retinopathy was reduced to half in those with tight blood sugar control four years after they stopped therapy.

Lead author Dr Emily Chew from the National Eye Institute said the study sent a powerful message to those with diabetes that well-controlled blood sugar had a positive, measurable and lasting effect on eye health.

A drug for cardiovascular disease may in future reduce diabetes related blindness and be an alternative to injections for diabetic macular oedema, UK researchers claim.

The researchers, in partnership with GlaxoSmithKline, found that Darapladib inhibits an enzyme which is increased in people with diabetes and causes blood vessel leakage in the eye, leading to retina swelling and severe vision loss.

They said regular eye injections of existing treatments were not effective for about half of DME patients but Darapladib in tablet form had the potential to reduce the need for monthly injections and protect against vision loss in a wider group of patients with diabetes.

The researchers are planning a clinical trial.

Volk Optical has upgraded its Volk iNview portable fundus camera, expanding the range of device compatibility to include the iPhone SE, and improving app and internal optics for better imaging.

The latest app version is available for free download from the Apple App store by searching Volk iNview. 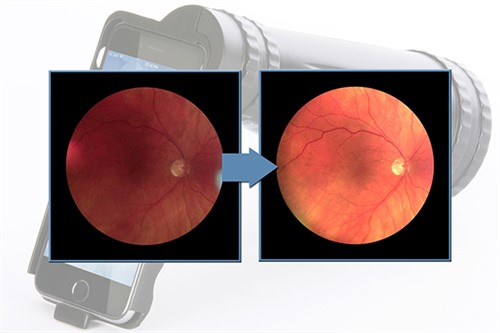